Greyt start to the year.

Happy 2018 everyone! We forking make it! Sorry... "The Good Place" is on Netflix. I love Kristen Bell.

Last week, I had a shift at Loxley's former kennel. It's among the very best rescues for greyhounds and greyhound-mixes. If you're looking to adopt and are anywhere near Washington state, you'll find a world of information at Greyhound Pets. We also hold meet-and-greets throughout the year, so come see the pups.

People ask me about Loxley all the time. Maybe I post too many pictures of her, maybe I just don't look antisocial enough on our walks, I don't know. But, here are some things I've learned working with the breed and of course adopting one.

Let's start with the greyt stuff:

+ They're often incredibly, ridiculously affectionate. Just giant cuddle bugs.
+ Greyhounds have 2 settings: on and off. When they're on, they're excited, playful, and running. When they're off, they're cats.
+ They're typically quiet and many don't bark. The howling you sometimes hear when greyhounds get together is called "rooing."
+ They just want to be near you. A bed in every room is the way to go.
+ Loxley is pretty greyt at entertaining herself, given a fair amount of cardboard to chew on, paper to shred, and did I mention, she's a cat?
+ They're very enthusiastic about training, having been bred to be. As long as you know what you're doing and you're willing to put in the work, you can usually count on an eager and focused partner. As a former professional animal trainer (who's worked with a number of mammal species), I can say she's one of the most receptive creatures I've been fortunate enough to train.

And what can be less than greyt:

- I cannot overstate how fragile these dogs are. They're big, but not very sturdy. They have incredibly thin skin, so a little scratch in the yard can bleed a lot. Loxley is pretty young and dopey, and she still hasn't figured out her proportions or turning radius. She's always running into things (greyhounds can run 40+ mph so watch out!). Your owner skills need to be in overdrive because there’s just zero self-preservation instinct.
- They have wacky normals and CBC/chem (blood) levels. Bonus: they often also react poorly to premeds and/or anesthesia. Doses that would be fine for other breeds of comparable size could be fatal to a greyhound. You need to find a vet who’s experienced with greyhounds.
- Separation anxiety is common. Loxley used to roo a lot when we’d leave, but we worked through it by leaving for short periods and then working on duration. And by giving her lots of toys and enrichment while we’re out—mom and dad leaving isn’t scary; it’s playtime!
- Dental disease is common. Plan for $500-1000 dentals at your vet every year.
- This is not a breed that’s going to hang out while you work on your car, like a lab. If they see something interesting, they will run. You need a yard with a high fence. Loxley can clear 4’.
- I think the biggest challenge I see with rehoming retired racers is that people expect too much out of them. Potential owners often think that because they've had race training, they must be house trained. They're not. Most have never had a home outside of a 3x10 kennel. They will need socialization, obedience training, and housebreaking. They can also have the same bed or food related aggression as any other ex-kennel dog. I encourage prospective adopters be patient and have realistic expectations. Remember, no one's perfect in a new situation right off the bat. 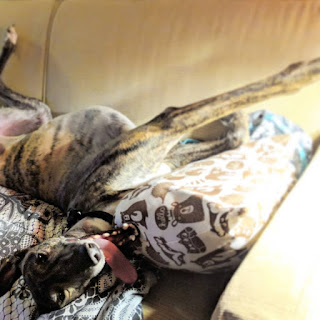