Not a New Year's resolution, but you're probably going to call it one anyway.

Husband did the Whole30 for 4 months to reassess his eating habits and felt so much better during that time that he opted to stick with most of the dietary restrictions after the program wrapped.  I wasn't looking for that hard of a reset, but his experience made me want to take a look at what I was eating.

I decided to cut out what I suspected were my 3 trigger foods for the month of January: sugar, dairy, and grains.  During the week, I only got sugar from fruits and veggies and skipped dairy and grains all together.  I still allowed myself 2 unrestricted meals on the weekends because a date night and a friendship brunch are weekly necessities for my mental well-being.  And dammit, it's the weekend.

The first few days of January, I felt like I was going through withdrawals. I guess I was. Remarkably, I felt less like a living baguette after about a week. Then my skin started clearing up. Then I dropped 5 pounds.  As I started feeling better, the cravings subsided, my mood evened out, and even my anxiety eased up a bit.  Food science is way cool.

Flash forward. This is the first week of February and the first week I started sprinkling in a tiny bit of bread and sugar during the week.  I haven't been missing dairy at all (until I find myself fantasizing about ice cream and cheese). Anyway, this week, my skin basically smacked me in the face.  It was the physical equivalent of my pores screaming, this bitch just doesn't learn!  So, I think I'm back on the wagon.

I went into high school not realizing I was chubby (#babyfat4dayz) and kind of wished I'd stayed in that oblivious headspace, because once the realization sunk in, I became super restrictive with my diet. My weight dropped, I started getting cast in bigger parts, and I felt more social, which probably led to having more friends.  But, at the time, those were my driving motives, not being healthy.  I eventually found a happier medium, but as adult, I've been cautious about being too cautious.  That said, January's weekday/weekend experiment worked well for me.  And that's really what it's about: figuring out your body, eating well in a way that's sustainable for you, and just feeling better. 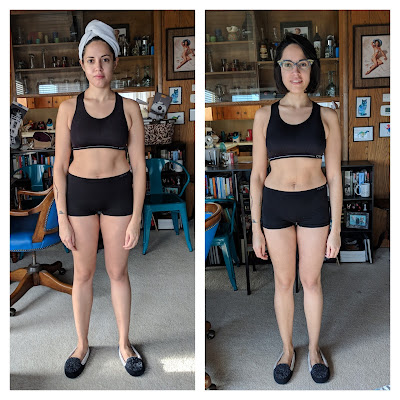 A Hindu, Muslim, Jehovah's Witness, and atheist walk into a bar.

Actually, we were 13, so it was more like walking to 7-11 for Coke Icees on the regular.  And Mimi's once when we were having a ladies-who-lunch moment. Their corn chowder has yet to be equaled, in my budget foodie opinion.

I have always been attracted to people who were different from me and these were my closest friends through elementary and middle school.  We did theatre together and were in a number of clubs, mainly focused on academics and community service.  We had secret Batman-themed nicknames (I was Catwoman, obviously) for passing notes in class. This was before cell phones, y'all.  We did splinter off at times and would have our own inside jokes—my Indian friend and I used to refer to ourselves as the Indus Valley Girls. I don't think any of the boys--or some of the teachers--got that one, but it made our moms chuckle.  Anyway, even when we would pair off, I don't recall us ever going through a mean girls phase.  We all just really liked each other.  We were consummate over-achievers, which turned out to be our downfall since we all got into different merit-based high schools. But for a solid six, formative years, they were the best friends a gal could hope for.

Despite our closeness, one quirky thing about the friendship was how infrequently we hung out outside of school. None of us were ever invited to the Jehovah Witness' house, nor was she allowed to visit any of ours.  I always thought of her as my closest friend, yet we never once went to the movies, had a sleepover, or celebrated one another’s birthdays.  It seems strange in retrospect, but it wasn't at the time.  My weekends were spent with my family, many cousins, or the kids of those in my parents' circle of friends. School friends were left at school.

When I went home a few months back, I found a treasure trove of old photos that I’ve only begun sorting. Here's one from the vault: 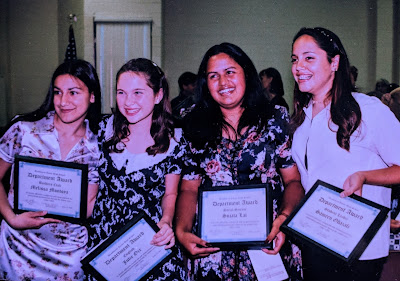